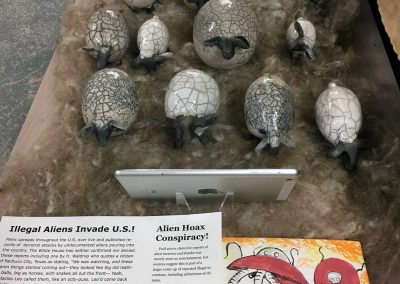 The entire Science Fiction/Fantasy concept began with The Sheep Project and the “sooon to com” Newsfeed: We Are What We Eat 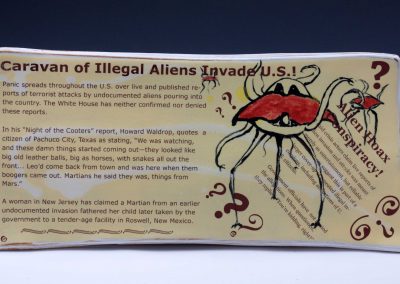 War of the Worlds Series: Taken not only from the Glaze (Clayscapes Butter) but the anti-Chinese immigration propaganda of the 19th Century [SOLD] 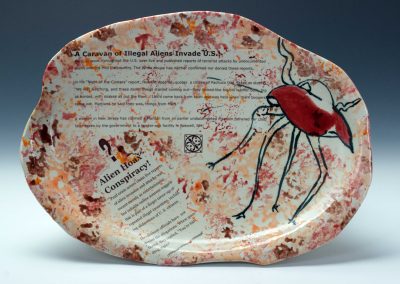 War of the Worlds series: Serving Fiction came out pinker than I expected but the color harkens back to the 1950’s term “pinko” and Communist Scare that brought us many classic alien invasion films. [SOLD] 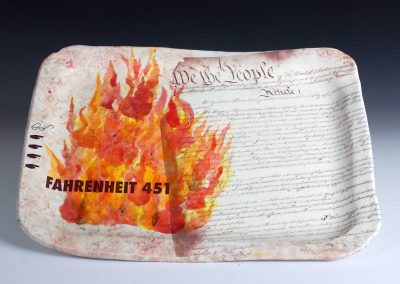 From the concept of Newsfeed and the constant screens in our lives, I naturally thought of Fahrenheit 451. [SOLD] 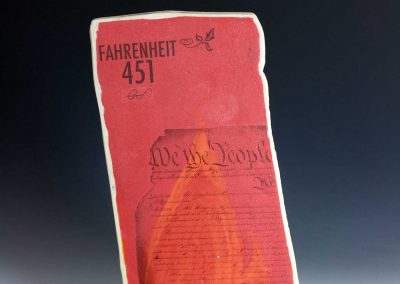 My favorite in the Fahrenheit 451 series. The Brooklyn Line Glaze Red Hook took on a rich, deep red tone during the second bisque firing (necessary for the decals) and the Stroke And Coat glazes blended into it nicely. 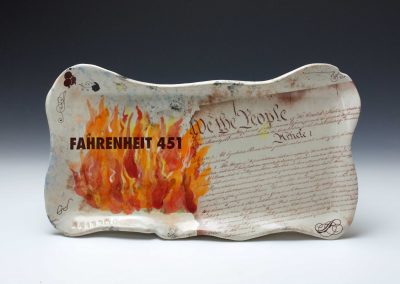 Fahrenheit 451 Series: A happy accidental splash of glaze gave the title of the piece and a new spin on today’s rhetoric on social issues. [SOLD] 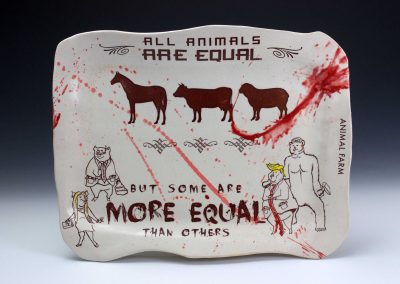 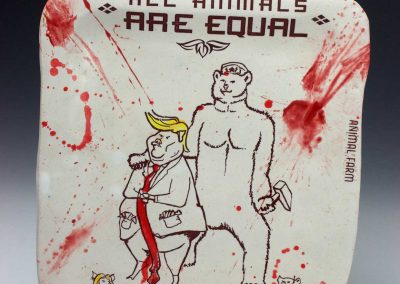 Animal Farm Series: The initial test piece. After pouring over Nast’s iconic political cartoons, I drew my pigs — and the Russian bear dominating the news. When the underglaze red seemed inadequate (and not quite registered), I added Stroke and Coat Hot Tamale after applying the decals. [SOLD] 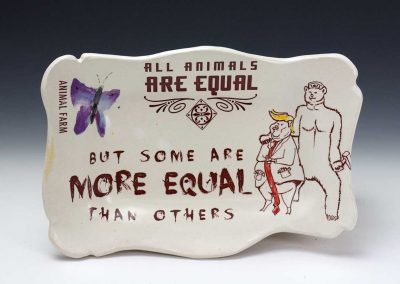 Animal Farm Series: I’d been working with Chinese painting techniques and underglazes last year and started to do some more on this dish. but it ended up becoming part of the series. 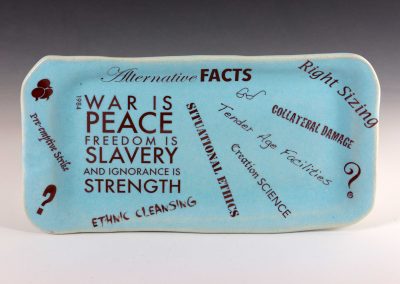 1984 Series: “Spin” is nothing more than Bradbury’s Newspeak brought to life and used in every sphere of our lives. 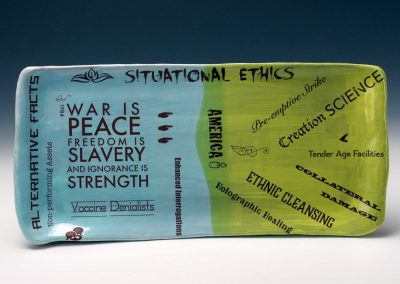 1984 Series: What started as a glaze test quickly turned into another examination of Newspeak. 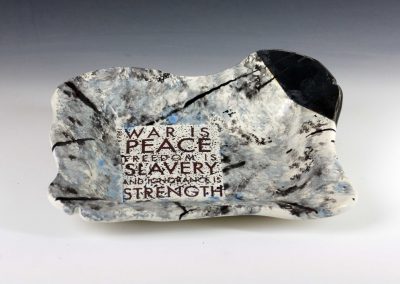 1984 Series: After an initial decal piece in the series came out of the kiln, another ceramicist suggested giving a more “graffiti feel” by applying Stroke and Coat to dirty the background. When it came out of the kiln, everyone loved it and said “It looks like marble.” That you, Sookie! (Her work is at Clayscapes Gallery and the Everson Museum Shop, Syracuse, NY.) [SOLD] 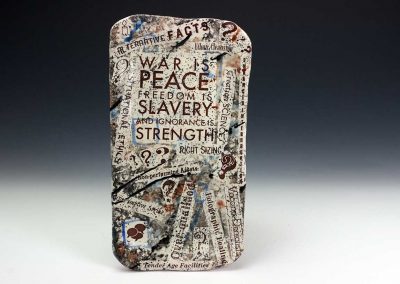 1984 Series: After the success of the first experiment, I decided to really push it and add some earthtones. I also used up most of my question marks… [SOLD] 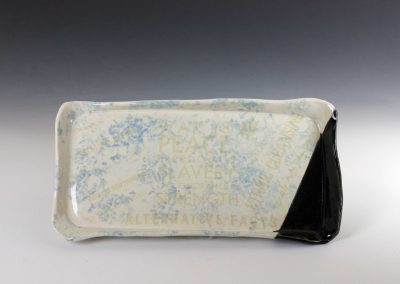 1984 Series: After Sookie’s and my initial experiment with the Stoke and Coat texturing, someone in Millie St. John’s class challenged me to test high firing the decals. At first I was disappointed when I discovered the decals had burned away, but then I realized they’d acted as a resist. So appropriate. [SOLD] 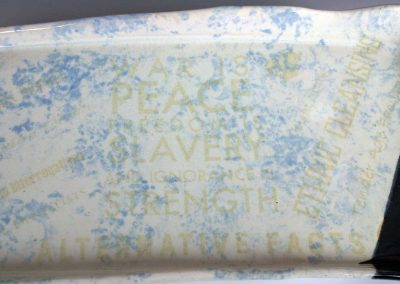 1984 Series: Close-up of the burned away decals and the faint images left behind at high firing. [SOLD] 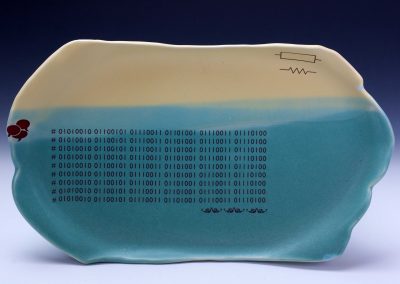 Resistor Series: While hunting for new fonts to use for the 1984 series, I stumbled upon a font I’d gotten for electronic circuit work. Suddenly, the idea came to combine the symbols for resistors with the binary code for “Resist.” The combination of Clayscapes Butter and Turquoise glazes are one of my favorites. 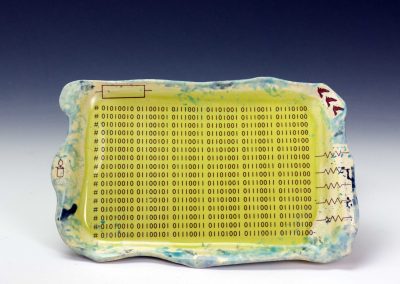 Resistor Series: Liked the energy of Brooklyn Line Flatbush heightened by the Stroke and Coat mottling. 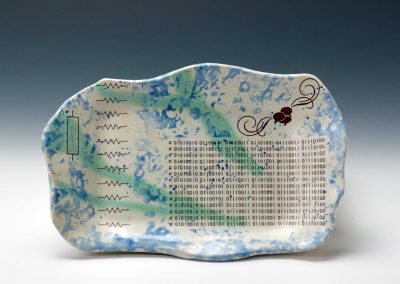 Resistor series: Combined streaming Clayscapes Mint Green over Cream before adding the decals and then texturizing with various blue Stroke and Coats. 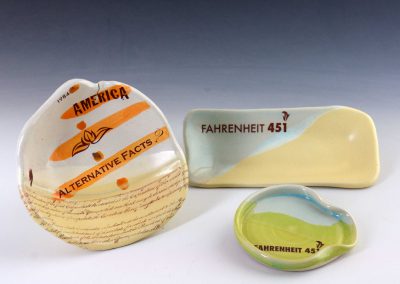 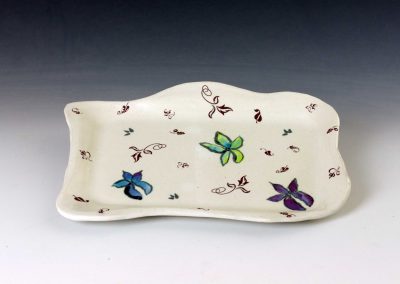 Something just for fun. Was testing my recently revived, dried up underglazes and then decided they needed some typographic flourish. 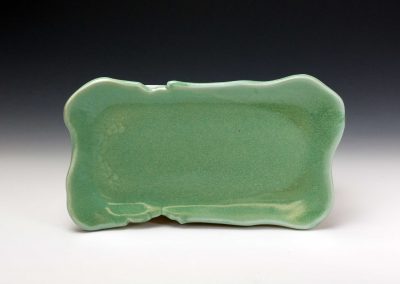 Too late to join the party! I was planning to test Clayscapes Mint Green with the decals but it came out of the glaze kiln too late to make it through the decal firing. But personally, I loved the result. [SOLD] 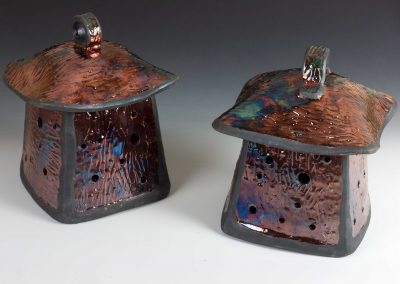 As if I didn’t have enough to do, I agreed to participate in a raku firing while trying to get things done for the Bubonicon 50 Art Show. I’m very glad I did. Thank you, Wes Weis, for all of your excellent instruction and help! 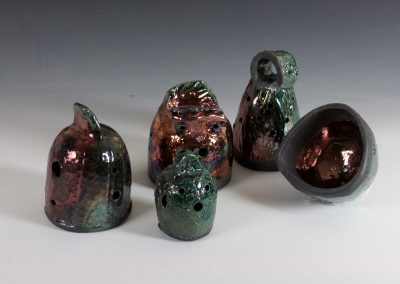 The original plan was to make raku creatures but I quickly realized I didn’t have enough time so the thrown, closed form creature bodies were quickly turned into tea light lanterns or wind chimes (after you add the chimes). 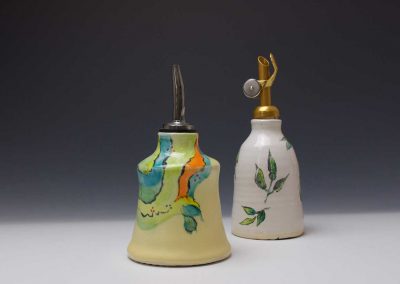 Examples of the faux majolica experiments from 2017. Since I do not have my own kiln, I am limited to the glazes and firing temperatures of the studio. I found that Clayscapes Cream and Butter had the stability to hold most underglaze colors and give me a satisfactory result. 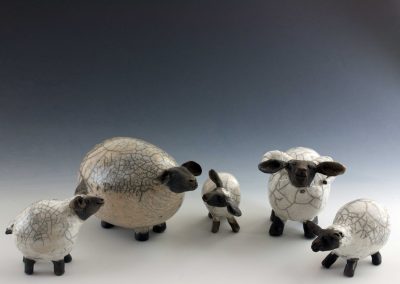 The raku ceramic sheep were a challenge to myself to find a functional use for raku firing. In this case, creating blackface sheep where the crackle glaze implies the wool.